When I first started working for Best Country 103, I asked my friends on Facebook if they could tell me what their first memories of country music were. My friend Kennette Orsingher told this amazing story of her grandfather and their family history in music. I read this story on the air of one of my shows, so when she told me she had audio of his music I had to have her share the story with you!

My Music Legacy
When I grew up, every holiday get-together was accentuated by singing and guitar playing. My Grandpa, Robert Fugate, JR (or Junior, as everyone called him), my dad, Tom Fugate, and my aunt Ella Bishop would haul their guitars up to my grandparents’ house, microphones and amplifiers would be plugged in, and the audience would gather around. Old Hank Williams, Willie, or Merle’s lyrics and melodies would soon roll out through the big family room.

My grandpa passed away in May of 2002.  My grandma eventually remarried and moved out of that big old house, but the memories linger. 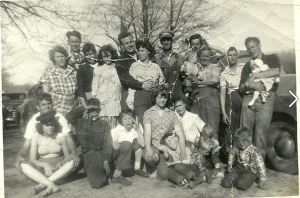 Music runs deep in this family. Two hundred years tucked away back in the hills of Eastern Kentucky helped to grow that love of music. The old hill songs still touch the blood of those who have the opportunity to play or listen to them, and the music followed the Fugate’s as they moved from Kentucky to Indiana, then to Wisconsin where my grandpa and dad were born.

They didn’t have TV’s when my grandpa was growing up, but the family had a radio, and they loved to gather around it to listen and sing. My Aunt Rosie had the voice of an angel and even wrote her own songs. At the age of 13 or 14, my grandpa started working as a logger. In the cold winters at the logging camp, there was little to do for entertainment in the evenings, so the whole group of them would gather and sing any song anyone knew. My grandpa’s love of music grew from that day forward, and he never forgot a song!

About the same time, my grandpa decided he wanted to play an instrument to accompany all of that singing. He became self-taught in both the harmonica and the guitar, sometimes playing both at the same time. Other family members wanted to play, too, and took up the spoons or washboard or picked on a guitar if they could find one (My dad can still remember the sound of those spoons clicking to the beat of the music while everyone played).

By the early 1950’s, people were encouraging my grandpa to record his singing. They were convinced people would buy his music. Money was put together, and he recorded a few records in a studio on paraffin discs. Some of the records went out, but my grandpa didn’t have time to travel around to different radio stations and get them to play his music (which is how most musicians got started back then). By that time, he had five kids and needed to keep working a regular job. He ended up following the logging work out to Oregon, where the 6th child was born, and the dream was put on hold.

With his love of music, it didn’t take long for him to find other like-minded individuals. In no time, he was playing in a couple of bands and made his winter living by playing in local venues. He played and sang at Lindy’s, The Junction, The Lighthouse Tavern, and other local establishments every Friday and Saturday night for years.
The band members would practice at his house, and my dad would come out and watch them play, then sneak back to his room and practice the chords and try to play along with them. By ten years old, he was completely self-taught on the guitar.

Getting that first guitar wasn’t easy. My grandpa took pride in his guitars and wasn’t easily letting a ten-year-old practice on his. My dad tells me he got his dad to buy him a guitar by threatening to play a “horn” in the band.  My grandpa was not going to let him play a horn and finally gave in and bought him an old, single-stringed guitar that had been left out in the weather, but could be had for cheap! The neck was falling apart, and the wood was peeling, but my dad could pluck out a mighty tune on that one string! (I think someone must have taken pity on him because he eventually got something he could practice chords on and make real music).

Eventually, my grandpa lost the joy of playing in large groups, and most of his performing was done for family and close friends. He, my dad and my aunt would get together to “play guitars” and the rest of us would visit and listen. It was a way of life for us for a lot of years.

A decade or so before my grandpa passed away; he had flown with a buddy down to California to a resort where Merle Haggard and his band played regularly. Merle wasn’t up to singing that night, but they talked my grandpa into playing a little for them, and one of the business owners asked him to sing with the band on stage. He sang one song, and the crowd went wild and called him out for an encore. They brought him back out, and he sang one more song, and the crowd was on their feet. But that was it. He refused to sing more in spite of the demands of the audience. The band didn’t like being upstaged by a “nobody”. When it was clear that the crowd liked my grandpa better than the singer who was taking Merle’s place, the band purposely played slightly off-key to make my grandpa’s voice sound off. Even though no one else noticed, Grandpa did, and he was too proud to tolerate that kind of behavior, even from a famous band.

My dad still plays guitar to this day. He has taught a few of his grandkids how to play, (I’m not sure what happened to my sister and me. It must have skipped a generation!) Two of my daughters picked it up very easily. They can also play a little self-taught piano, and I think all of them if they gave it the same passion and effort my dad and his dad did, could be successful musicians.

Music is in the genes. The kids are growing, my dad still loves his guitars, and my 16-year old has my grandpa’s voice on the playlist on her phone. It is the legacy that is passed down from one generation to the next. From Kentucky to Wisconsin, to Oregon. Like Hank to Hank Jr. the music lives on.

Kennette’s story is a wonderful tale of when music wasn’t made with electronic equipment and of a time when families sat together listening to Old Time Radio. Music is in the sound of whatever you use to make it; whether it is in spoons, your whistle or even simple foot stomping. Radio has brought families together for generations, so if you have a story, you would like to share on Country Dreaming send me your story in an email. You never know, your story could be the next listener feature on Country Dreaming!