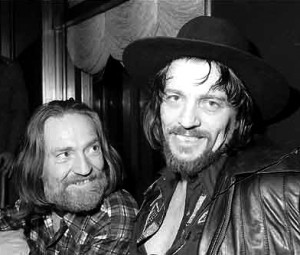 FILE–Waylon Jennings, right, and Willie Nelson are shown in this January 1978 file photo. Jennings, who defined the outlaw movement in country music, died Wednesday, Feb. 13, 2002, at his home in Arizona, after a long battle with diabetes-related health problems. He was 64. (AP Photo/File)

In the late 1960’s country artists became upset with the fact they couldn’t write their own music, let alone pick out their own band members. Artists like Johnny Cash, Waylon Jennings, Willie Nelson and many more stood up for their rights as musicians and pursued to put an end to the new “Nashville Sound,” that was taking over. Move forward to 2015 where we are seeing another outlaw movement break through with acts like Chris Stapleton, Sturgill Simpson and many others taking a stand to bring back the classic sound of country music. Pop country otherwise known as “Bro Country,” has been stirring up controversy as to whether this is country music or pop music, with artists like Luke Bryan, Florida-Georgia Line, and Sam Hunt taking a much more futuristic sound. Merle Haggard has voiced his opinion of Pop Country; Kenny Rogers, who has announced his retirement due to the pop country sound.

Divorce and Babies in Country Music 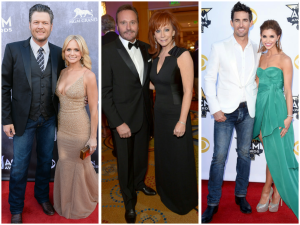 2015 was the year of divorces; as soon as we would hear of one, another would follow in suit. It didn’t matter how many or how few years they were together, it seemed like the old country song of; “You lose your wife, your trailer and your dog”, was the true country statement of the year. It all started with Miranda Lambert and Blake Shelton announcing their divorce in July of 2015; then Reba McEntire and her husband Narvel Blackstock announced in August;  followed by Jake Owen and his wife Lacey of three years announcing their breakup.  “A lot of people maybe shy away from it, but I think I’m going to do some weird stuff,” Owen says. “My wife and I are getting a divorce, and this is probably the hardest s— I’ve ever done in my life, to walk on stage every night and try to pretend like everything’s awesome when it really ain’t always awesome. You know what I’m saying?”[3]

But where a divorce happens a baby is born, and 2015 was a year for babies with artists like Eric Church, Jason Aldean, Jana Kramer (that is due any day) and David Nail whose wife had twins this year. But no pregnancy was as anticipated like Carrie Underwood’s. Carrie and her husband Michael Fisher welcomed Isaiah Michael Fisher on February 27th, “Tiny hands and tiny feet…God has blessed us with an amazing gift!” Carrie shared on Instagram along with this precious little hand pic. “Isaiah Michael Fisher – born on February 27. Welcome to the world, sweet angel!”[4] I am excited to see what 2016 brings for babies and hopefully no divorces!

Country Music’s Up and Comers for 2015 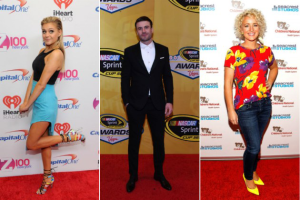 Country music has seen a lot of new artists this year. Sam Hunt, Cam, Chris Stapleton and Kelsea Ballerini have climbed the country charts making a name for themselves in today’s country music. Taylor Swift announced her transition from country music to pop in 2014 and record companies scrambled trying to find “The Next Taylor Swift”.  Kelsea Ballerini was immediately dubbed that girl, “Those are some big ol’ shoes to fill,” the 21-year-old musician says. “I love Taylor Swift and I’ve always been such a fan of her. That’s such a high honor to even be compared. I only hope to have a career as wonderful as hers.”[5] Chris Stapleton is a country artist that isn’t necessarily new to the circuit; from writing some of country’s number one hits to performing, Chris took home every award for male country artist at this year’s Country Music Awards.  Cam currently has the number one single for “Burning House”.  Whether you like country or pop, you’re bound to like yourself some Sam Hunt! 2016 has some new comers that are sure to be on a radio near you, from names like,  Clare Dunn, Maren Morris, Kane Brown, Sturgill Simpson and many more! 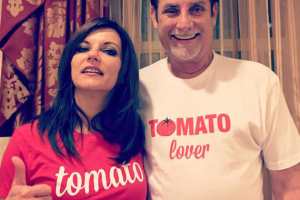 A Texas based country music disc jockey made such a controversial statement this year that some of women’s hottest country music acts took a stand to defend their right to be some of country music’s leading ladies. “If you want to make ratings in country radio, take females out.” Keith Hill was quoted as saying. “Trust me, I play great female records and we’ve got some right now; they’re just not the lettuce in our salad,” Hill said. “The lettuce is Luke Bryan and Blake Shelton, Keith Urban and artists like that. The tomatoes of our salad are the females.”[6] Female country artists such as Martina McBride, Miranda Lambert and Jennifer Nettles all spoke up immediately to defend their right for airtime on country radio. It seemed like in a time where gender equality is being fought for, Keith Hill was trying to start a movement of eliminating females from country music.

In defense of women in country music, Martina McBride argued, “The idea about not playing two females back to back… I get it. If you have less than 19% of your music by females, you want to spread it out. The real point is… why is your playlist less than 19% females?” McBride continued, “In regard to the comments being sexist. Hmm … that can be tricky. It seems to me that if a song is not played because of the sex of the artist … it might just fall into the sexist category.”[7] Martina has since started a line of Tomato T- Shirts, one saying “Tomato” for female supporters and one saying “Tomato Lover” for the male supporters of female artists on country radio!

Joey and Rory Feek are one of country music’s beautiful love stories that started on the stage of “CMT’s Can you Duet” in 2008 releasing their first album “Life of a Song,”.  Not only their music charmed fans but their personalities, their religious beliefs, the fact that Rory is always in overalls and the 1870 farm home they live in. In 2014 Joey+Rory welcomed their first child together; a beautiful little baby Indiana, Indiana was born with Down Syndrome.  With their gracious hearts that didn’t matter to Joey+Rory; “Although that news came at first as a surprise to us, Joey and I wouldn’t have changed a thing,” Rory writes on his blog, This Life I Live. “During the pregnancy, we never did an ultrasound, or saw a doctor, nor would it have made any difference if we had. We trusted that God would give us the baby He wanted us to have… and He has. Out of all the parents in the world, He has chosen us to care for and raise this special gift.”[8] Life seemed to be complete, until Joey announced that she was diagnosed with terminal cervical cancer in 2015.  Since then Rory has been blogging about their final days together as a family and thankfully Joey was able to enjoy Christmas surrounded by all her family. With sadness comes blessings, and Joey+Rory have been blessed to receive a Grammy nomination for their song, “If I Needed You.” “Woke my bride up this morning with a baby in my arms and the news that our version of ‘If I Needed You’ was nominated for a Grammy,” Rory Feek wrote on his Facebook page. 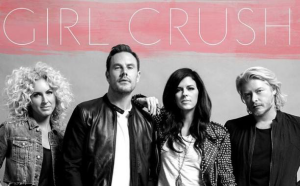 To most people a “Girl Crush” represents feelings of desire towards a female from another female, but if you’re listening to Little Big Town’s Girl Crush then you know that’s not what it’s about. “I want to taste her lips/ Yeah, ’cause they taste like you,” Karen Fairchild of Litte Big Town sings, “I want her magic touch/ Yeah, ’cause maybe then/ You’d want me just as much.” Soon after the release; came controversy, as listeners of country radio all over the world complained saying the song was about being a Lesbian. The song is actually about a female having a “girl crush,” over the girl that stole her ex’s heart and wishing she was her so he would love her. Soon after, Girl Crush became the number one country song on the radio for a consecutive 13 weeks[9], complete with a long list of country music artists showing their support for Little Big Town. “Girl Crush” won song and single of the year at the 2015 Country Music Awards and is currently nominated for three Grammy’s!

These are just a few of the biggest moments of 2015. There are tons of new up and comers coming onto the country music scene, lots of controversy, divorce, babies and unfortunately deaths. This year we lost Little Jimmy Dickens, Lynn Anderson, Daren Norwood, Buddy Emmons, Billy Joe Royal, and Randy Howard; but their lives will always live on through their music. It also seemed to be the year for crossover artists; like Cindy Lauper and Steven Tyler of Aerosmith taking a leap into country music, though not doing so well. It is also the year of past country artists like Clay Walker, John Anderson, Willie and Merle came out with new albums. Carrie Underwood broke her driver’s side window after her dog locked her baby in the car and Hillary Scott of Lady Antebellum’s tour bus caught fire with her making a narrow escape. There is so much to cover when it comes to this year.  I believe 2016 is going to a huge year for country music and I can’t wait to sit back and enjoy the ride. Put in the comments what you think some of this year’s biggest moments were I would love to see them! In the meantime, see you next year!