Country music’s hottest newcomer Mo Pitney is taking country music by the horns and reminding all of us die hard country music fans that traditional country music is far from dead. In fact, Pitney who performed “Clean Up on Isle Five,” at The Grand Ole Opry received a hard to achieve standing ovation.  At 23 years young, Pitney, who writes his own music says, ““There’s so many songs that come to mind when I write, but I don’t try to mimic another song,” Pitney shared. “I hold them as a standard of what ‘great’ really is. I don’t think I’ll ever reach that standard, but it drives me to push harder.”[1] 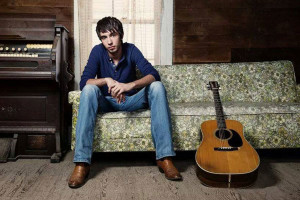 A Cherry Valley, Illinois resident Pitney got his start in country music at a young age, thanks growing up in a family of bluegrass musicians. “I grew up in a world of Bluegrass where people stay up all hours of the night, jamming in a hotel room or a hallway at a Bluegrass festival, standing in a circle with no audience, just standing in a circle playing music,” he explains. “You realize that they’re not doing it for anything other than their love of the music.  That’s where I came from.”[2] Pitney started playing drums at six years old and the guitar at twelve, even though at the time Pitney was suffering from “boxers fracture” a broken arm in a cast that went from elbow to ring and pinky finger on right hand. Pitney learned how to play by laying a towel over his dad’s guitar, so it didn’t get scratched. Not long after Pitney learned how to play the entire CD of San Quentin by Johnny Cash.

February 4, 2015; Pitney was pouring concrete when he got a call from a friend saying Merle Haggard was in town and doing a taping on the Marty Stuart Show at the North Star Studios in Nashville. At 4:45 pm Pitney met Merle Haggard, and then proceeded to write a song about it. “I got to meet Merle Haggard for the first time [on] 2/4/2013 at 4:45,” Pitney recalls. “When I got to meet him, I tell people that I just don’t get nervous around people, but Merle was one guy that I walked away from that meeting going, ‘Ho-ly crap, that was Merle freaking Haggard. “And with that feeling that I’d never felt before, I went home.” Pitney continues, “and I had writing scheduled with a buddy of mine, Don Sampson … and I said, ‘Hey, you want to write a song that’s not gonna make my record?’ and he said, ‘Sure!’ I don’t know why, but it ended up making my record anyways.”[3]

Since meeting Haggard, Pitney has quickly risen to everyone’s attention after releasing his first single “Country” which Pitney wrote with Bill Anderson and his current single “Boy and a Girl Thing.”  Pitney was also recently engaged to Emily Bankester, a fiddle and claw hammer banjo player for the blue grass family band The Bankesters. But when Pitney is not creating music, you can find him enjoying his love for hunting and fishing, or training his bird dogs, Duke, Duchess, and Daisy. Though with his new found stardom, finding the time for hunting and fishing is becoming more difficult for Pitney to find the time, although he is looking forward to a deer-hunting trip at the beginning of November. These day’s Pitney finds himself living in Ashland City, Tennessee where he say’s, “I love living out there,” Mo says with a wistful tone to his voice. “ You can go out the back door and hunt and fish.  I can put my boat right out there on the Cumberland River about two miles from my house.” [4]

Pitney’s first album is set to be released this fall though no date has currently been set.  Pitney is not worried about when just that it’s all in God’s timing. “I really allow God to guide my life,” Mo says without hesitation. “If I stay true to my music, and sing and write what means something to me, then I should be all right.  Wherever I end up, that’s where I’m supposed to be.”   I guess that’s where Pitney’s favorite line comes from; “Faith, Family, and Patriotism.”[5] With Pitney’s old fashioned twang, he’s bound to be in the spotlight for a very long time.